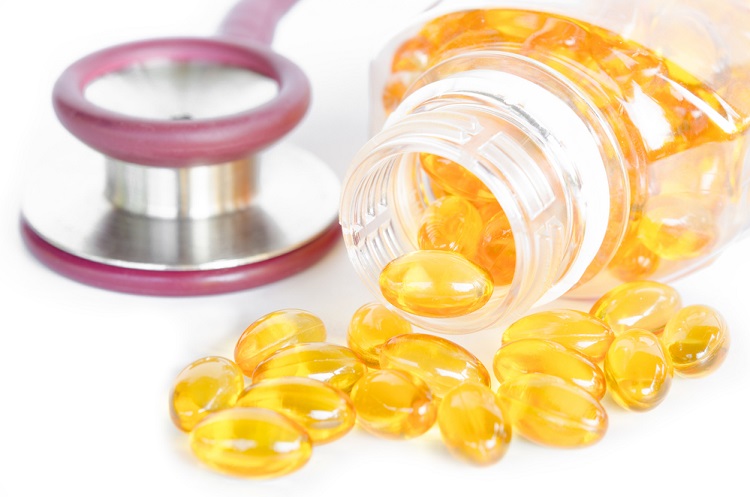 WERE YOU AWARE THAT FISH OIL HAD THE FOLLOWING BENEFICIAL EFFECTS ON THE BODY?

Benefits Hypertension (High blood pressure): Fish oil has been shown to lower mild hypertension when it is due to cardiovascular disease, specifically high cholesterol and atherosclerosis (hardening of the artery walls).

Reducing Sudden Death in Heart Attack Victims: Raising omega-3 fatty acid levels in our country would have about eight times the impact of distributing automated external defibrillators, and two times the impact of implanting Cardioverter Defibrillator Pacemakers with respect to preventing sudden death from heart attacks.

Reduces Heart Irregularities: Fish oil... especially the DHA content of it has been shown to lower heart rates and also prevent arrhythmias (disturbances of the normal rhythm in the heart's beating), thus decreasing the chance of sudden death by a heart attack.

Depression: Persons with mood disorders such as depression benefit from fish oil supplementation. Lack of omega-3 fatty acids and in particular DHA has been linked by researchers to depression.

Aggression: A new study of teenagers has found that fish oil and DHA consumption relates to lower hostility rates in teenagers. Hostility has been shown to predict the development and manifestation of heart disease.

Schizophrenia and Psychosis: Omega-3s have been given as a sole medication, or an adjunctive to antipsychotics, to schizophrenics and manic-depressives with marked effect on psychotic symptoms.

Multiple Sclerosis: Omega-3 fatty acids are known to affect key blood proteins (matrix metalloproteinase-9; MMP-9) which are produced by the immune cells of individuals with MS. A new study evaluating the effects of omega-3 on MMP-9 in patients with MS suggests that the intake of fish oil, containing omega-3 fatty acids, may have potential benefit in MS by decreasing MMP-9 levels.

General allergy disorders: Studies learn that omega-3 fatty acid-intake by mothers during pregnancy may protect babies against the development of allergies. Fish oil has been found to protect against symptoms of hay fever, sinus infections, asthma, food allergies and allergic skin conditions such as hives and eczema

Exercise Induced Asthma: research has demonstrated that fish oil supplementation has a protective effect on exercise-induced bronchoconstriction in elite athletes, which may be attributed to its anti-inflammatory properties.

Skin disorders and skin health: Skin disorders such as psoriasis have been shown to improve from fish oils. In the skin of persons with psoriasis the amount of compounds causing inflammation is many times greater than normal. Fish oil inhibits the production of these inflammatory compounds. Fish oil improves the health of skin, nails and hair.

Fish oil supplements have been shown to benefit in rheumatoid arthritis (RA), and other inflammatory forms of arthritis, such as occurs in some persons with psoriasis and gout. EPA and DHA in fish oil reduce the amount of compounds causing inflammation.

People suffering from non-insulin dependent diabetes or type II diabetes benefit from fish oil supplementation. Research show that persons who consume 5-10 percent of their dietary energy consumption in the form of fish or fish oil, have less insulin resistance.

The consumption of fish oil lowers the risk for cardiovascular disease and osteoporosis in post-menopausal women. (Pre)Menstrual symptoms such as menstrual pain are often alleviated from the use of fish oil supplementation. Omega-3 fatty acids are converted into pain relieving substances (prostaglandins type-3) that control contractions of the uterus, which cause the cramping.

Research has shown that consumption of fish oil is linked to lowered risk of age related macular degeneration, an eye condition which is the leading cause of severe visual loss in people over age 50.

Fish oil has been proven to be beneficial in intestinal health. Fish oil has an anti-inflammatory effect in inflammatory bowel disease (Ulcerative colitis and Crohn's disease).

HOW MUCH FISH OIL DO WE NEED?
Click Here For My Nutritional Recommendations For My Patients Handout and page down to the section on Essential Fatty Acids & Fish Oils.

LK Saugstad. Omega-3s have been given as a sole medication or an adjunctive to antipsychotics, to schizophrenics and manic-depressives with marked effect on psychotic symptoms.” Nutrition and Health. 2006; 18,2: 89-101